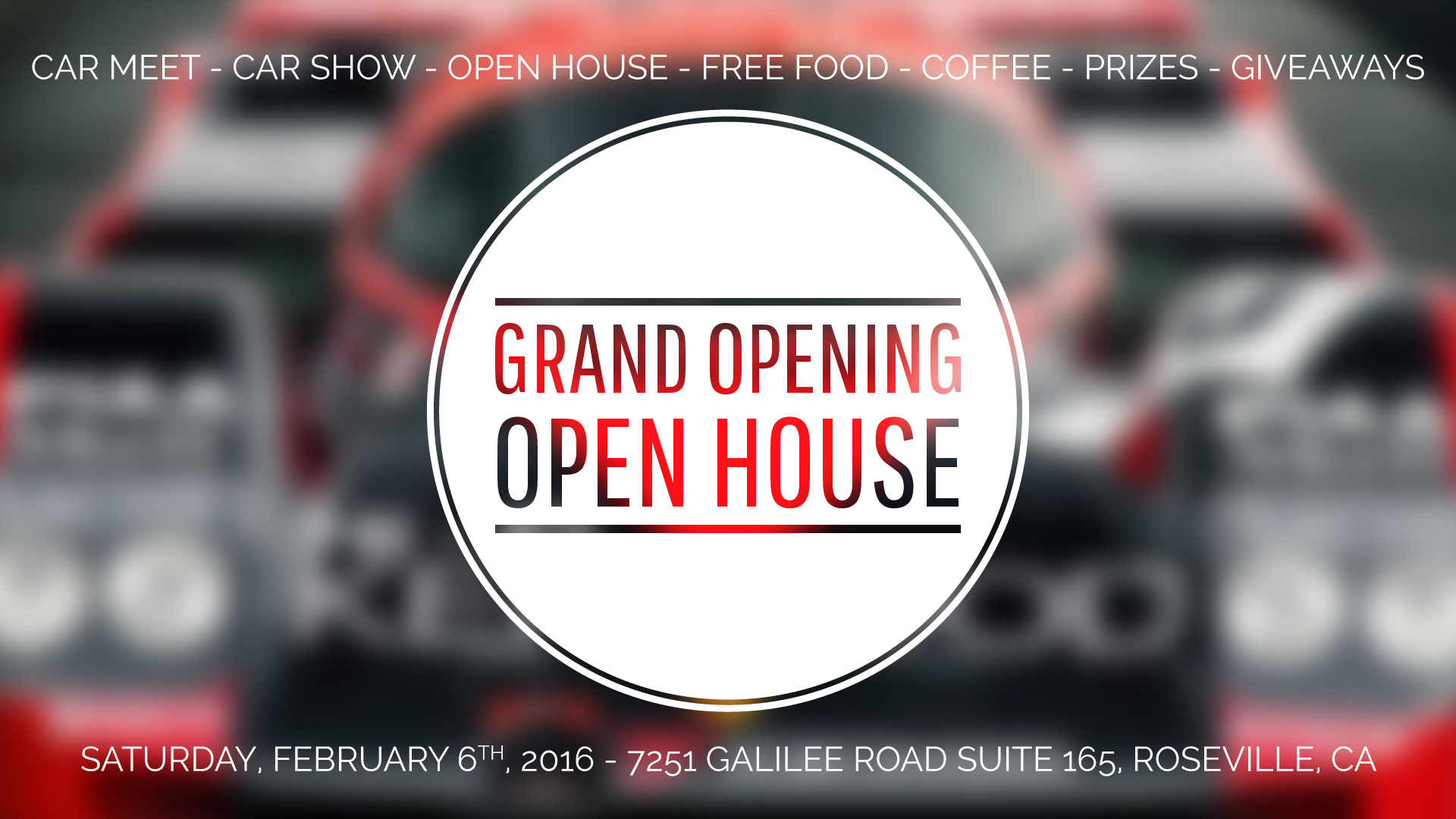 If you’re in Northern California – this is the place to be! Saturday, February 6th at 9am at our new shop in Roseville.

It’s gonna be off the hook! 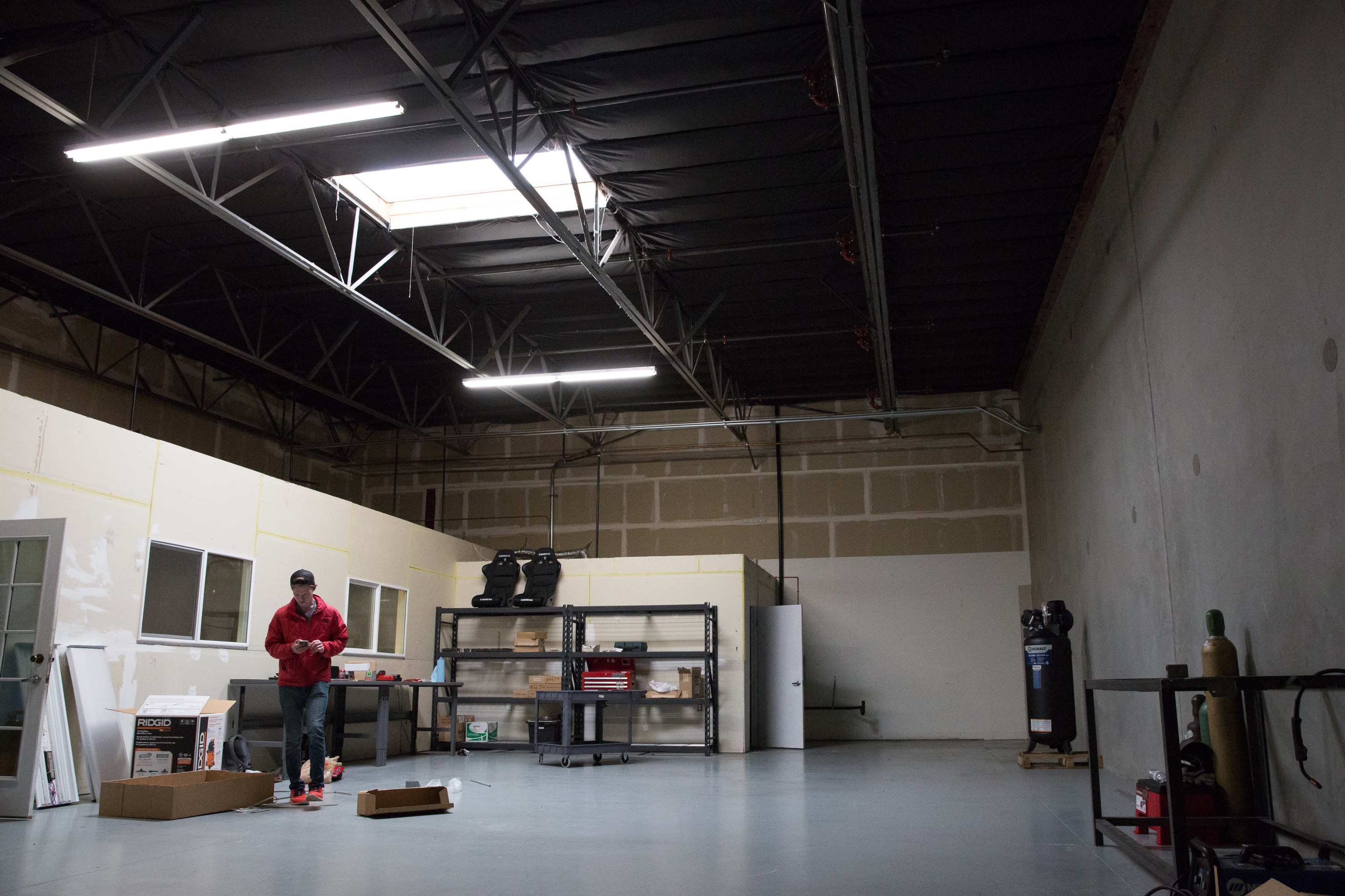 Hey everyone! We’ve been working nice long 16 hour days while both moving into the new shop and working on filling the tremendous volume of orders we’ve been experiencing (thank you all for that!). This new shop space will give us both the space and the added time/productivity to continue to fill orders quickly and develop some awesome new products that we’re excited to announce in the coming months. 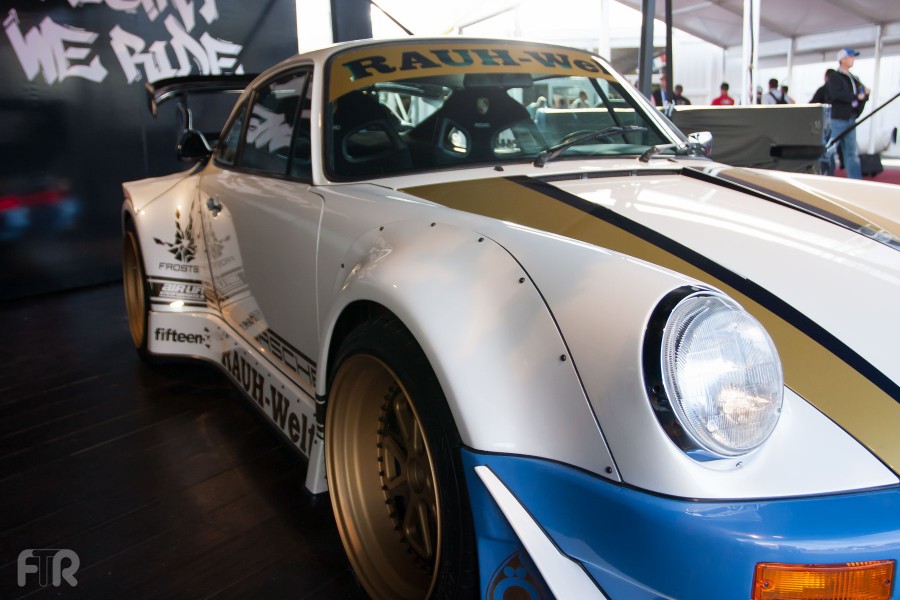 The biggest trend at SEMA, no surprise is overfenders. What started out as a utility to get more track width out of a race car has turned into its own multi-million dollar industry within, taking over everything from classic Camaros to Lamborghinis, and everything in between. 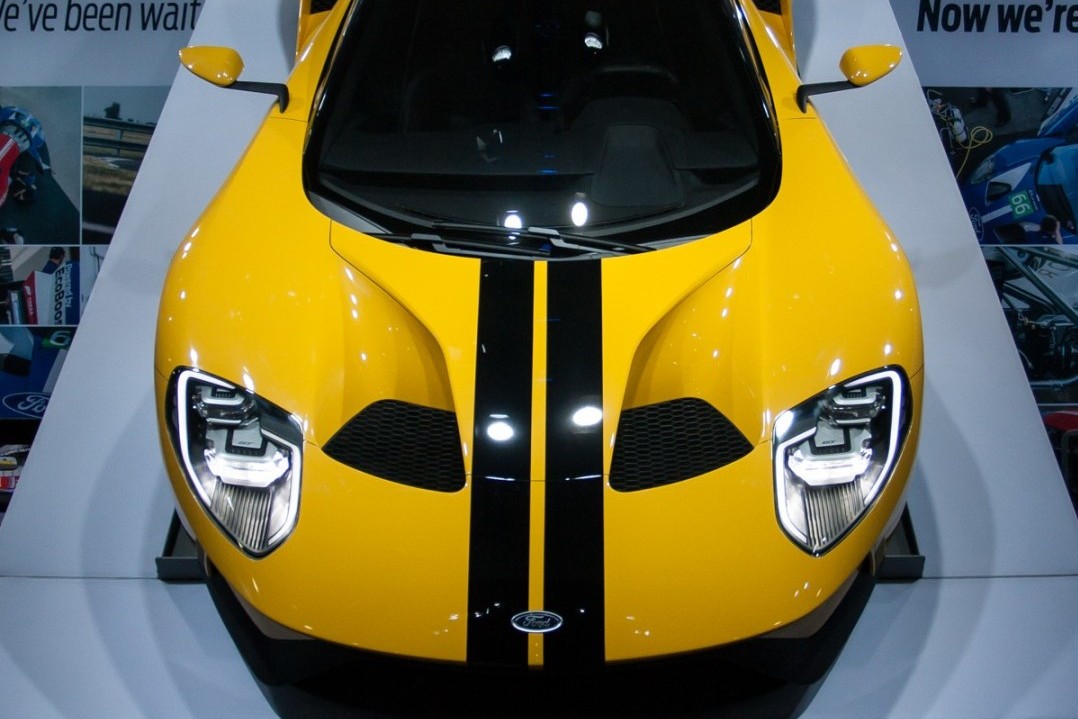 We’re back at the SEMA Show in Las Vegas, NV this year. After cramming all of this week’s work in during the previous weekend and Monday+Tuesday, we flew out to Las Vegas on Wednesday morning.

First stop was the Ford booth… Obviously we made a bee-line for the new Le Mans race car. Can’t wait to see this work of art race next year.

Another one of our favorites from the show was the #158 Continental Tire Sportscar Challenge 2015 Mustang. 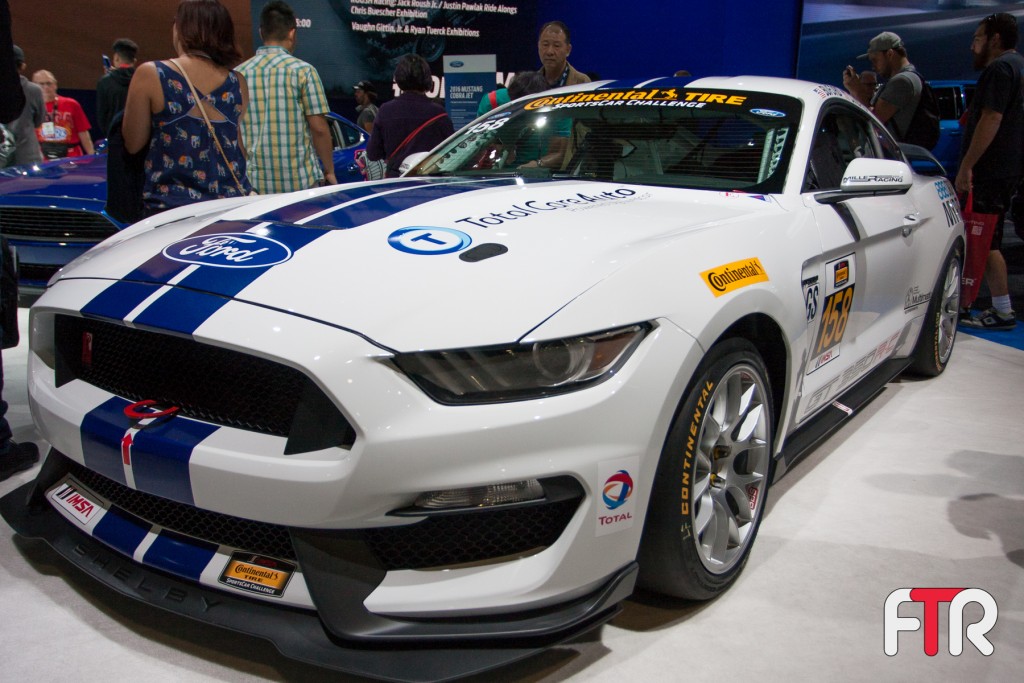 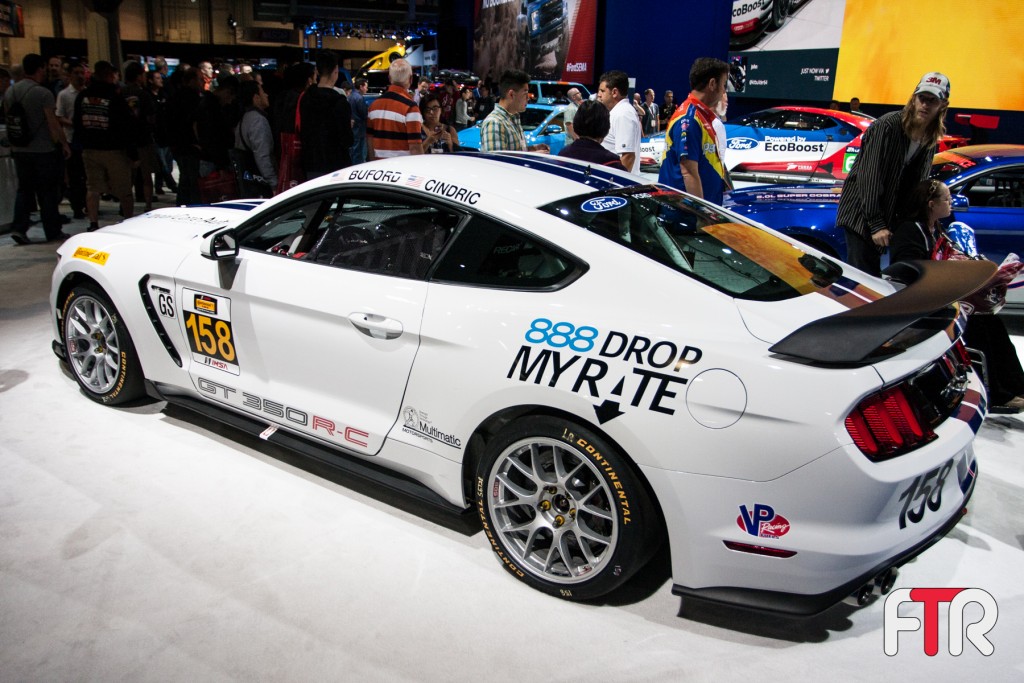 Of course, we couldn’t walk away without staring at the new 2016 Ford GT in all it’s glory. I’m generally not a fan of obnoxious colors, but I have to say it sure looks good in yellow. 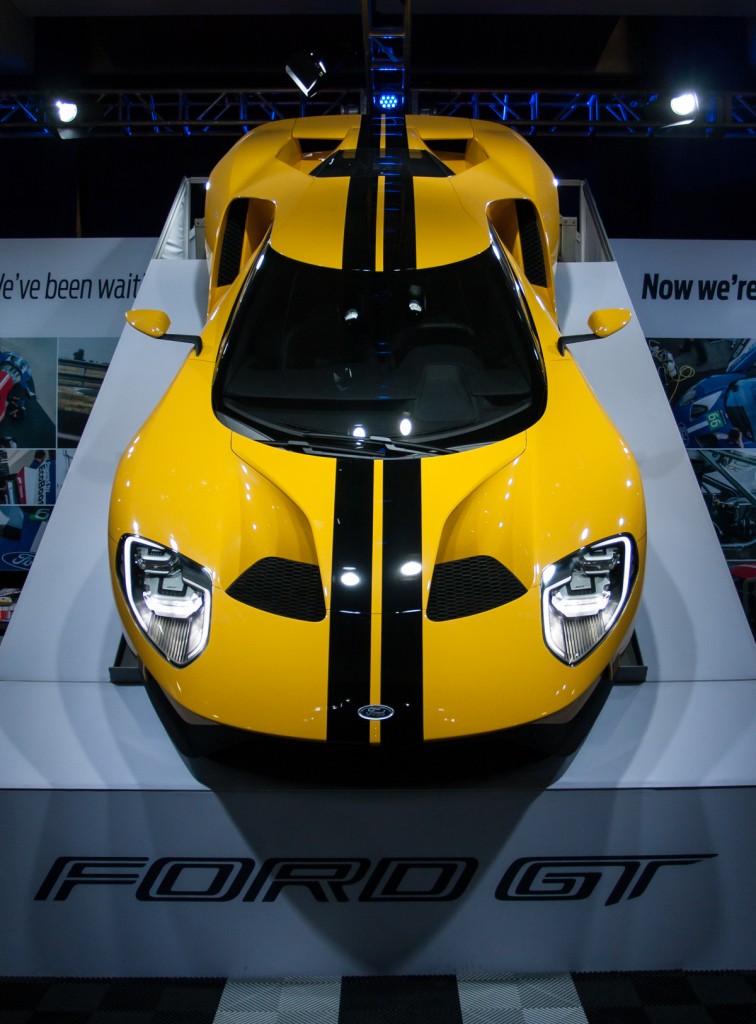 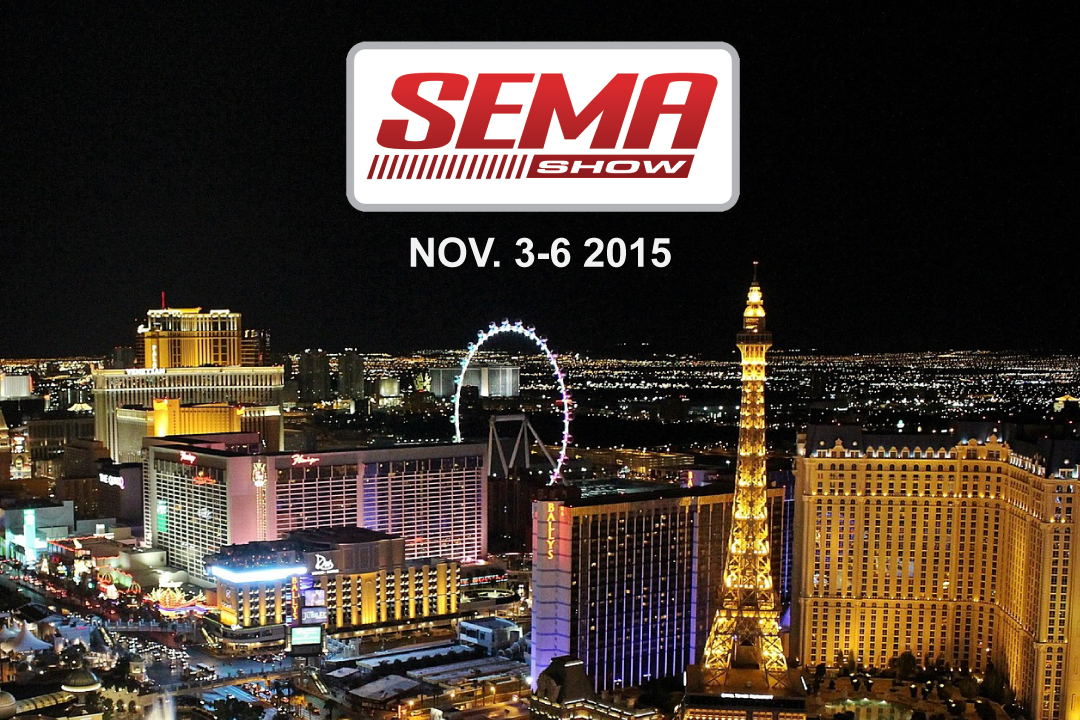 Hey everyone, just a quick FYI, we will be out at the SEMA Show in Las Vegas this coming week. If you’re going to be out at SEMA, give us a shout on social media or via email. If you’re not going to make it out there this year, be sure to check our Facebook, Instagram, and right here on our blog to see daily photo coverage of the cars, booths, and people.

If you place an order during this time, please give us a couple extra days to ship it out, since we will be out of town and not able to process orders until Monday. Standard length sweater support rods are processed through our film in network, so they should ship out as normally scheduled. 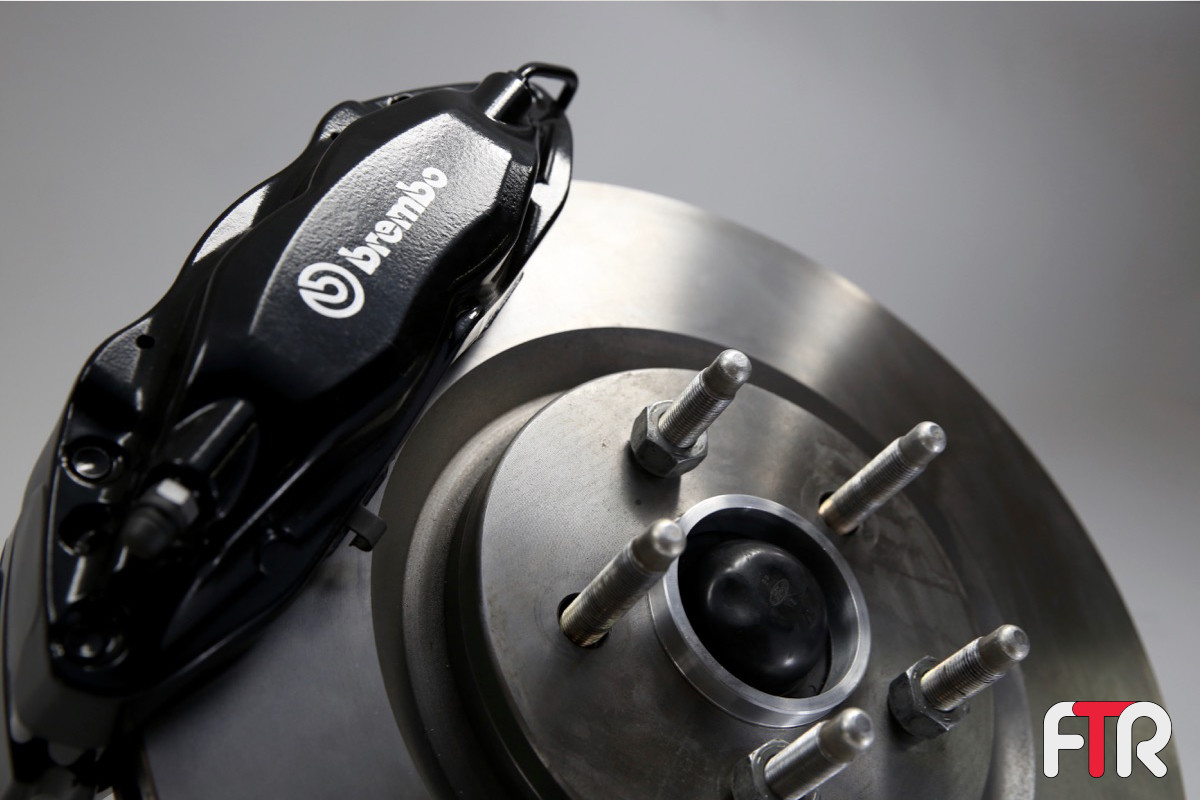 With the introduction of our GT500 Brembo Brake Kit, there have been a lot of questions about what the total cost will be to put these on your car, start to finish. Here are some sample configurations, complete with price breakdown and part numbers. 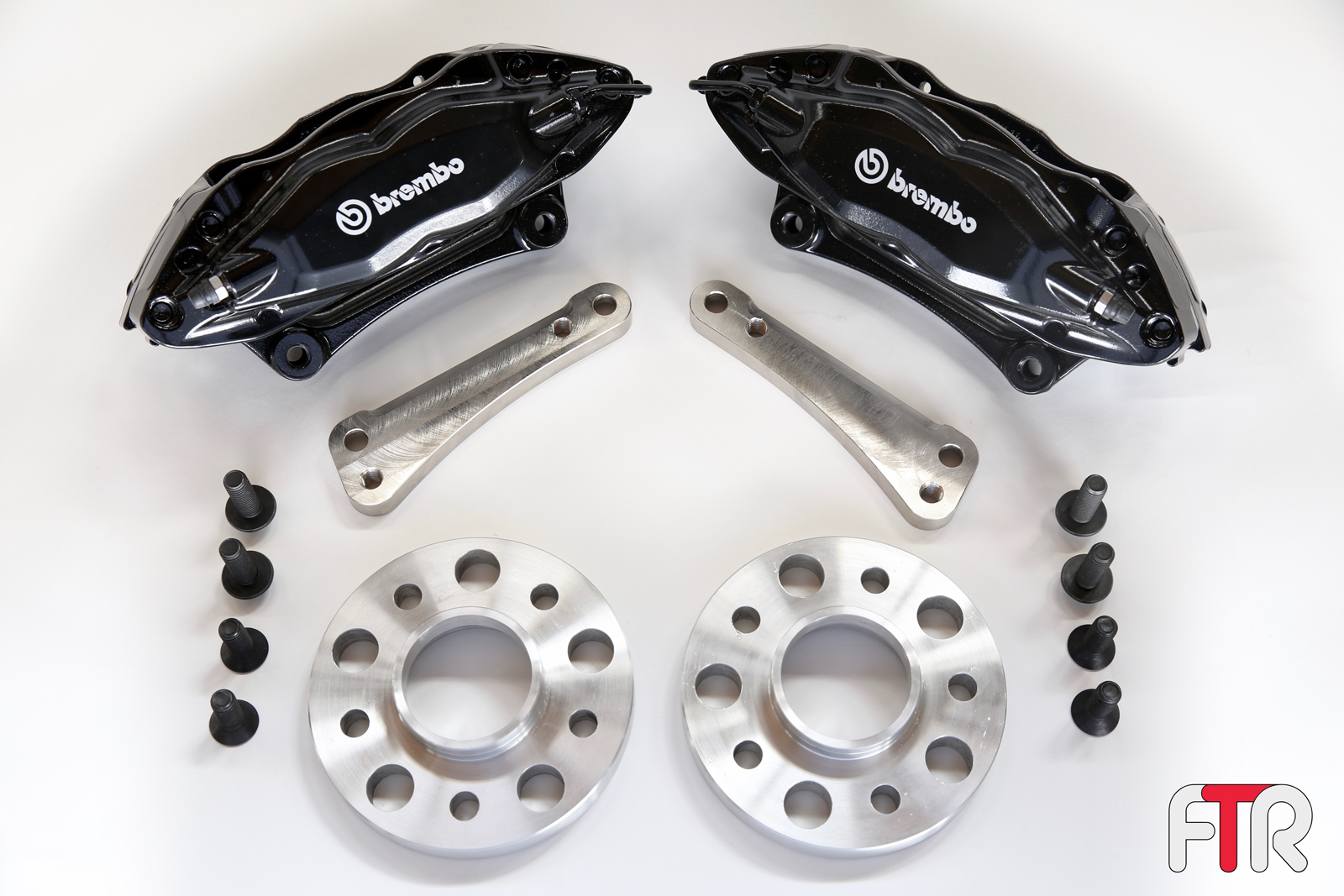 Hey everyone! Now that the final designs and prototypes are done, we are all ready to go with our GT500 Brembo Kit. I know that a lot of you have been waiting very patiently, and I have spoken to many of you personally over the phone, so I know that we have had a huge demand for this kit to finally be brought to market. I’m excited to say that we’re finally rolling into the production stage!

Pre-orders are subject to discounted pricing of $375 (list price: $450). We expect to ship the first production kits on October 1st. They will ship out on a first come, first serve basis, so we will ship the kits out in the order that we receive the requests.

Link for the pre-order page: http://www.fullytorquedracing.com/sn95-gt500-brembo-brake-kit.html

NOTES:
A set of 3/4 inch custom spacers (included) are required to use this kit. This will add to your wheel’s offset, so plan accordingly.
This kit requires the use of 18″ wheels. Since wheels vary from brand to brand, we cannot guarantee fitment for any specific set of wheels. Based on Ford’s specifications listed here, the Ford Racing M-1007-S1895 and M-1007-S1895B 18″ wheels, or equivalent, have been verified to work.

We expect to ship the first kits October 1st. They will be shipped on a first-come, first-served basis, meaning
that your pre-order will secure your spot in line. 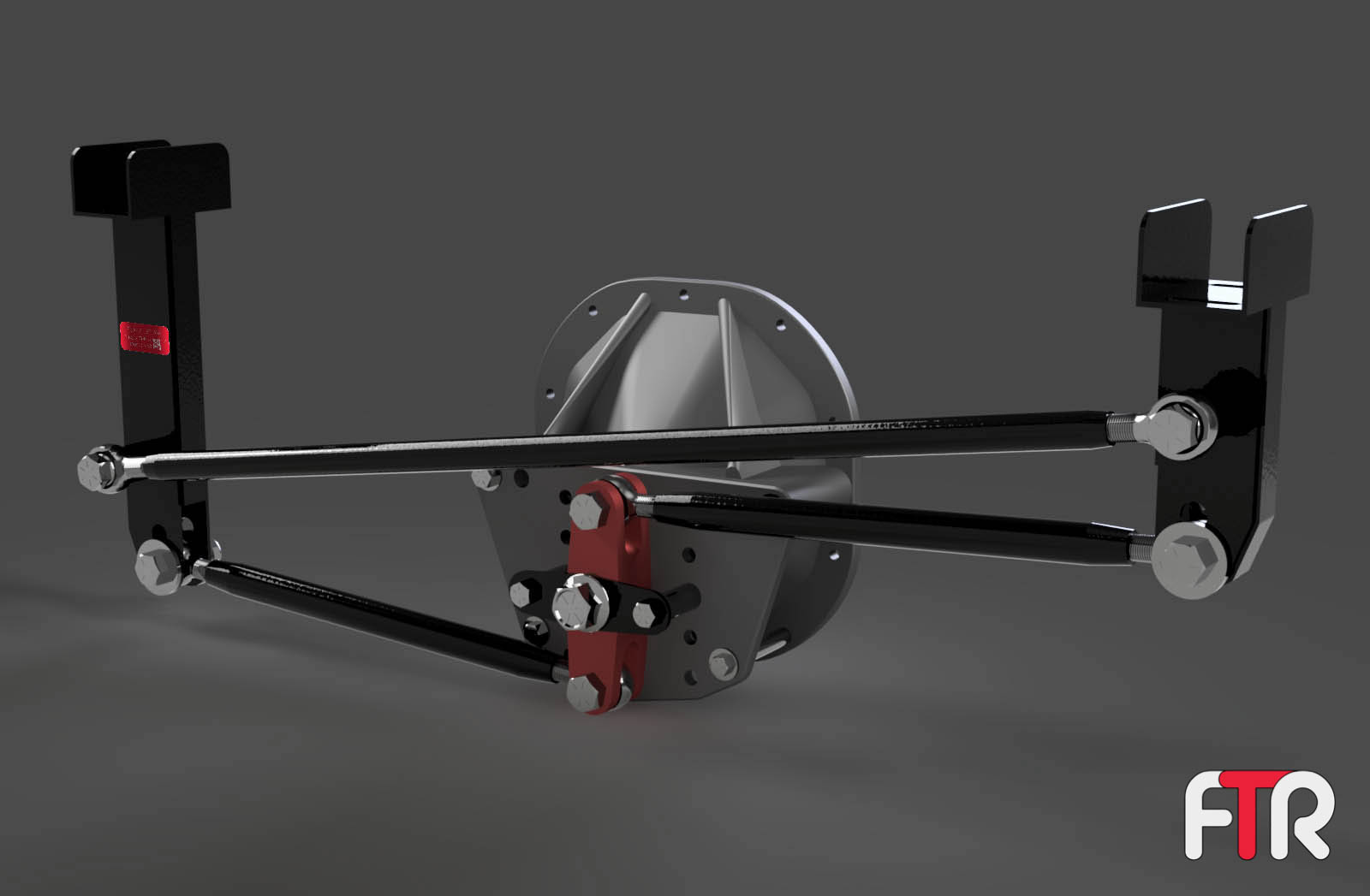 We recently opened up pre-orders for our new SN95 Watts Link. The purpose of this post is to go through the design step-by-step and discuss the engineering behind what we’ve created.

In 2014, we first started development on our Watts Link. There are currently a few SN95 watts link’s on the market, but they all lacked a few features that we wanted to see. Our #1 concern was the following problem: no current Watts link on the market was able to locate the car’s rear roll center lower than a Panhard rod. While the Panhard rod is good solution for rear axle lateral location, it compromises on a couple areas. First off, a Panhard rod, by nature, does not have identical cornering characteristics left and right. When compressed, the axle will be laterally offset to the left, and when decompressed, the axle will be offset to the right. When cornering, this issue becomes even more complex, as the mounting point on the chassis is moved relative to the axle and the axle deviates from its proper location.

A Watts Linkage, in contrast, provides identical cornering characteristics left and right. This concept was invented by James Watt himself (hence the name).

Clearly, the Watts Linkage is an ideal method of laterally locating the axle, due to its consistent horizontal location throughout articulation.

Our goal is to combine the best of both worlds: Pair the superior cornering characteristics of the Watts Link with the lower roll center of the Panhard rod, previously impossible to obtain with a Watts Link.

We’ll start at the center of the part. Our differential plate mounts to a Strange R5234 differential cover. This cover is part of the “Ultimate 8.8″ axle package, and has built-in mounting holes intended for an axle brace. We thought this would be the perfect cover to accommodate our mounting plate.

This is the widest and most flexible range of adjustment of any SRA lateral-locating device on the market.

The initial design for our bell crank was a 1/2″ threaded aluminum plate. This bell cranked function correctly, however we have since redesigned it for even more strength, rigidity, and overall sexiness. 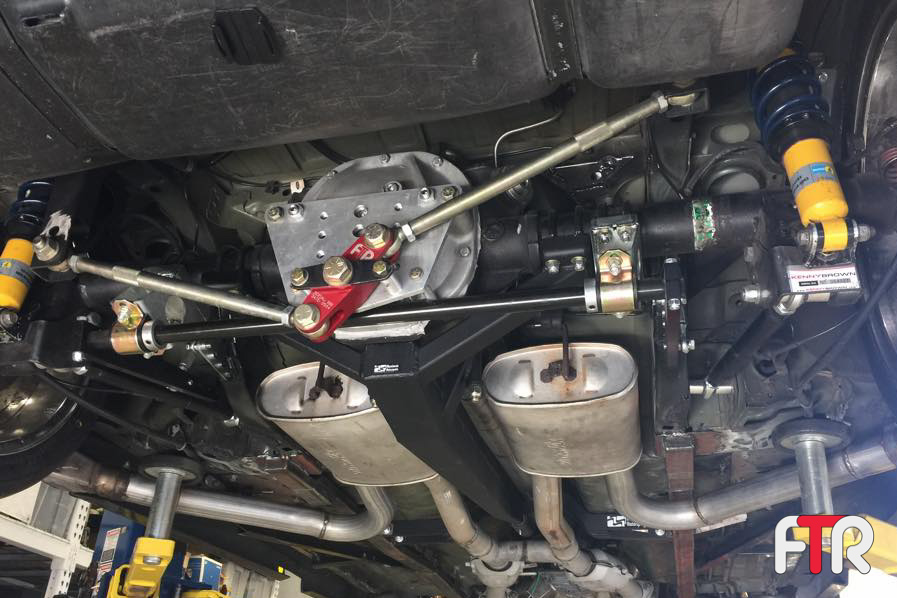 The bell crank is available with three different bushing packages, depending on application: 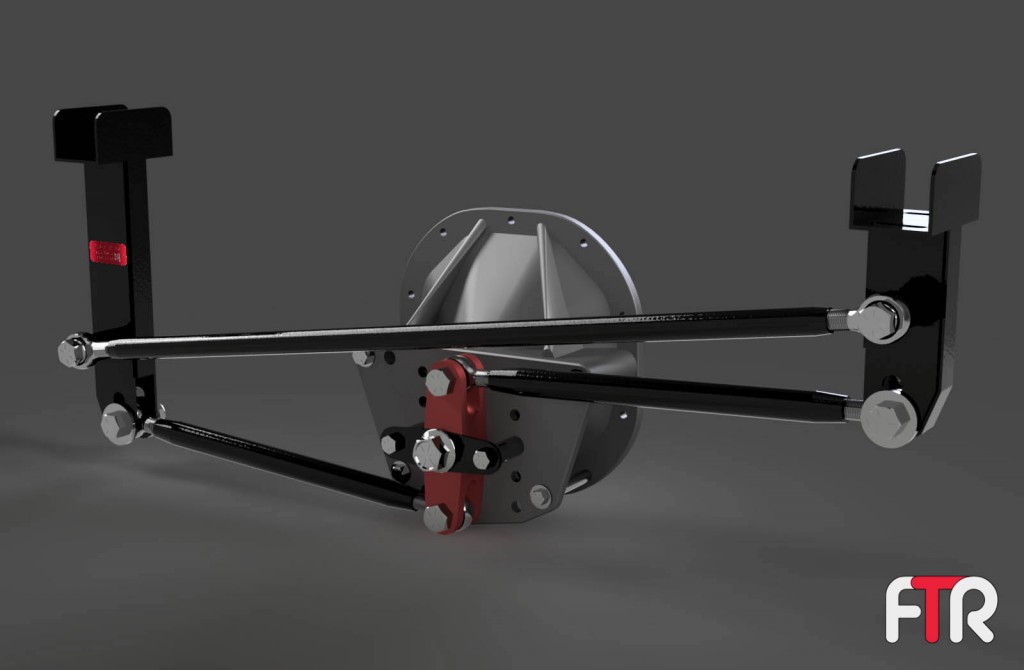 In July of 2014, we sent our prototype watts link down to Brett at BTM Autosport in San Diego. Brett had previously ran a competing part, but by switching to the FTR part he found even more grip due to the increased rigidity and lighter weight of the FTR piece.

“Going from the Fays2 Watts Link to the Fully Torqued Racing Watts Link changed the car’s handling characteristics drastically. We used the same roll center height we had on the Fays and the car had so much rear end grip it produced understeer. ” – Brett Madsen, BTM Autosport

Since the installation of the FTR watts link prototype, Brett’s team has achieved the following victories:

The prototype version of the Watts Link on BTM Autosport’s car differs from the production version, which includes a more robust bell crank, laser cut brackets, and a lateral support. However, we told Brett to be as hard on the Watts Link as possible, and he has provided. After each race, the Watts Link has been inspected and has shown no signs of wear, flexing, or cracking.

Here is a video of the prototype in action:

As you can see, there is a bit of flex in the bell crank, so we have since upgraded it. However the function and strength has proven to be quite sufficient. 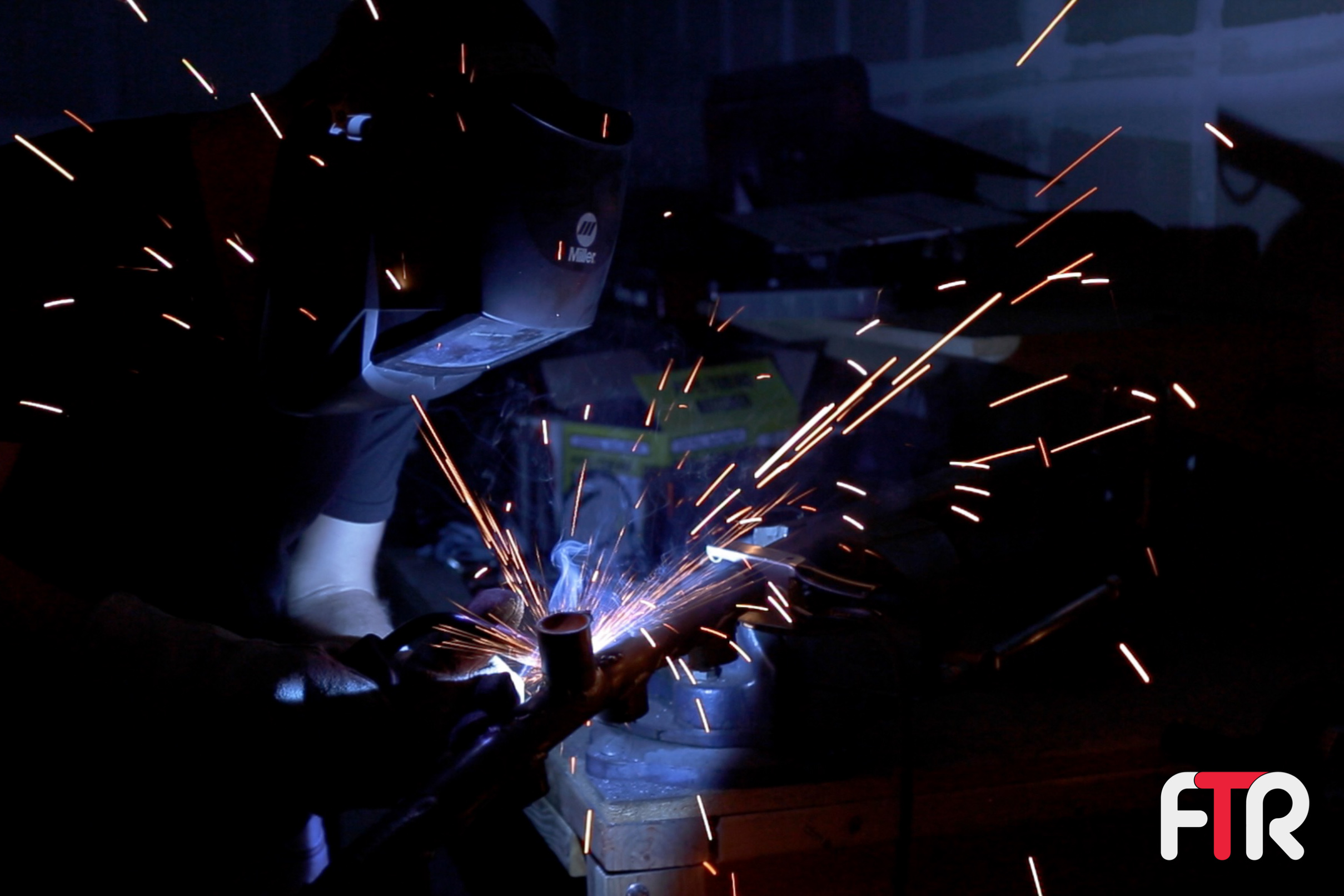 We spent some time with a local filmmaker, Derek Maves, working on this little 30-second promo for FTR, showcasing some of what we do. Give it a watch!

If you want to check out more of Derek’s work, check him out here: http://www.youtube.com/user/zerek44